Redefining the popular view of microbes 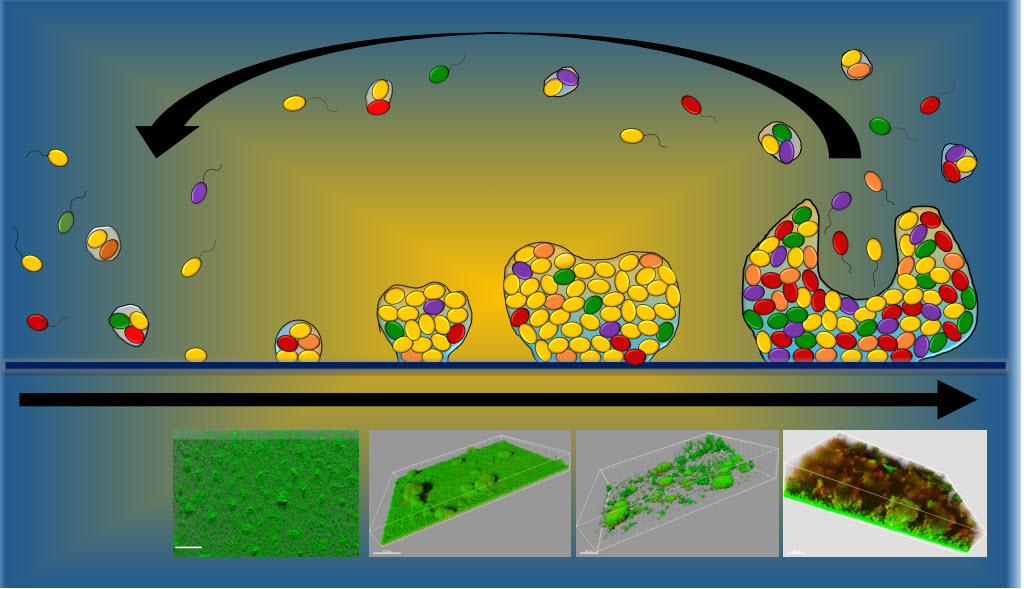 When I present a lecture to a general audience, I often start with the same slide. It is a blank slide, and I ask the audience to think about the first image that comes to mind when they hear about microbes. It usually ends up being a cartoon representation of a microbe, a single cell, often with a flagellum, that is swimming in an ether – a common image widely propagated in the popular culture.

We now know that the absolute majority of microbes do not exist as single, free-living cells. Instead, they live as tight communities of interconnected cells known as biofilms. Then comes the question as to what biofilms are? In a recently published Perspective article, we take a holistic approach to examining the nature of biofilms.

We can look at biofilms as collections of individual cells clumped together. This conventional view arises from the century-old tradition of microbiology where microbes have been regarded as single cells; self-sufficient individuals that aggregate and temporarily adopt a sessile biofilm lifestyle, that are later disseminated during biofilm dispersal. We have termed this the ‘single-cell-centric’ view of biofilms.

On the other hand, a biofilm can be regarded as a single entity, an individual organism comprised of many different cells that can communicate and perform coordinated functions that benefit the whole multicellular biofilm. Subsequently, the dispersal of single cells and cell aggregates from the biofilm can be regarded as a method of dissemination, similar to seeds or spores of traditional multicellular organisms. We have termed this the ‘biofilm-centric’ view.

Biofilms have more similarities to conventional multicellular organisms, like plants and animals, than we thought

In addition, we propose a novel fundamental characteristic of biofilms as incubators of genotypic and phenotypic diversity in the microbial world. Mounting evidence suggests that the biofilm mode of growth promotes generation of genotypic and phenotypic diversity among biofilm cells. The protective properties of biofilms, which can increasingly minimise the impact of external stressors from the surface towards the deep layers of biofilms, are also well documented. These features, combined, make the biofilm a unique life form; a training ground that provides an unparalleled environment where cells can mutate and sample variably low doses of external stressors, thus eventually evolving variants that are best adapted to overcome the threat.

At first, these three visions of biofilms may seem mutually exclusive and it could be tempting to make a choice about which is the most accurate. Rather, we believe all three perspectives are complementary and only by examining biofilms using a holistic multifaceted approach we can gain a better insight into this unique mode of life.

Biofilm research is a relatively young field, and it was only towards the end of 20th century that biofilms became the object of systematic research. We now increasingly appreciate differences between biofilms and planktonic cultures that have been traditionally employed in microbiology research. The more we delve into investigating biofilms, the more we appreciate just how much we have yet to find out about the biofilm lifestyle. Based on the work of many researchers who have contributed to the progress that biofilm research has seen in a relatively short period of time, we are also beginning to recognise that biofilms are far more complex than a collection of cells, and that the more conventional single-cell centric view may not be sufficient to understand this phenomenon. As perfectly pinpointed by one of the reviewers of our manuscript: “An interesting observation of the reviewer is that new “biofilmers” usually begin with the single-cell-centric view until they notice that this is not enough, as the beginning of a journey through the complexity of biofilms…”. We certainly agree with this observation.

The scientific process is dynamic, and definitions are given to phenomena that reflect observations available at that time. While scientific progress continues, it is important to reassess definitions to bring them up-to-date with current research, as well as facilitate new research directions. Here, we broaden our understanding of biofilms by defining them not only as a lifestyle for individual microbial cells, but also recognising biofilm properties that are characteristic of multicellular organisms. We also present a new paradigm of biofilms as incubators of diversity in the microbial world. We hope that our multifaceted perspective will help to further unravel the complexity of biofilms, while also shifting the popular perception of microbes from that of single free-living cells towards that of biofilms as the default microbial life form.