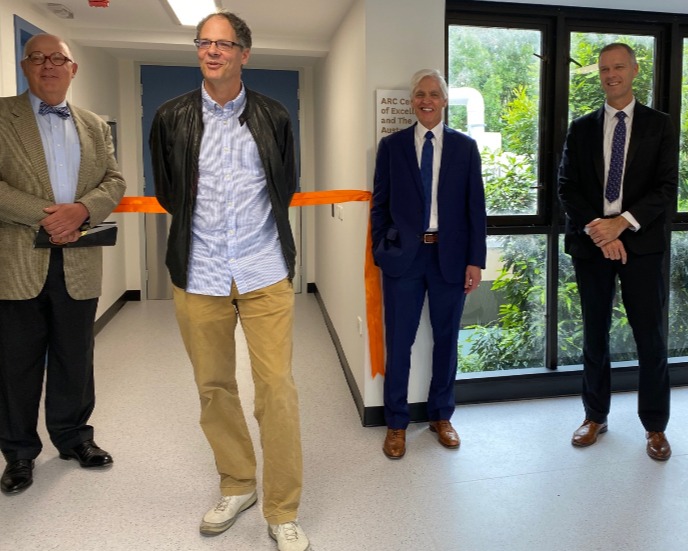 With the snip of an orange ribbon, the ARC Centre of Excellence in Synthetic Biology has been declared open.

More than 130 people attended a virtual soft launch, including Chief investigators from across Australia, early career researchers, members of the national Centre Advisory Committee and many industry partners.

The event marked the final signing of contracts with all partners, although much preparatory work has occurred in the past year to position the Centre for success over its seven-year life.

Centre Director Ian Paulsen outlined the Centre’s vision, which is to build on Australia’s historic strengths in agriculture by designing and constructing synthetic microbes that can take agricultural biomass or waste streams from industry and turn it into high-value products such as pharmaceuticals, industrial biochemicals, fuels or plastics.

“Synthetic biology is a relatively new science,” Professor Paulsen said. “It combines an engineering mindset with molecular biology approaches, with the idea that we can treat genes and DNA as modular, standardised parts that can be constructed into biological machines or circuits from which we can build entirely new-to-nature circuits or synthetic microbes.”

Early career researchers and Chief Investigators presented their vision for research over the next seven years, with projects ranging from the industrial and social benefits of synthetic biology to the engineering of synthetic mitochondria and organelles – ‘plug-and-play organisation for cell-based factories.’

“We actually have a scale to have real impact on Australia as a nation,” Professor Paulsen said.

“We hope the long-term legacy will be the emergence of a new bio-manufacturing industry in Australia and lead to new synthetic bio start-up companies that can form an ecosystem of nimble companies able to address the broader, myriad problems that face Australia.